Talk about your favorite prospects and the happenings of the Canucks AHL affiliate, the Utica Comets.

Jack Rathbone with three assists in his first game for the Comets paired with Jett Woo.

Big Jonah Gadjovich with six goals and an assist in the first six games.

Well, that didn’t take long! Two shifts into his AHL career, and Jack Rathbone picks up his first career assists. Brilliant job by Rathbone (#3) to settle a rebound at the blue line before playing give-and-go with Will Lockwood (#10) for a one-timer. Luukkonen stops the initial blast, but John Stevens (#16) picks up the rebound but waits for Luukkonen to move before putting his shot into the wide-open net. Good stuff from the Comets early
--- https://streamable.com/hq1dgd

Powerplays? Who needs ’em! Lockwood (#10) and the third-line capitalize again for the Comets with a quick bang-bang play behind the Amerks goal-line to set up John Stevens (#16) for his second of the night! A great forechecking presence from this line forces the Amerks into a bunch of egregious turnovers behind their net.
---https://streamable.com/w48ywa

Haha, naturally. After several minutes pinned into their end, the Comets first line break out and smoothly hand off the puck to Jonah Gadjovich (#21), who rifles one past Luukkonen to break the tie. Think everyone in the o-zone got a touch on this puck before Gadjovich put it in. Very Canuck-ian goal from the Comets here.
---https://streamable.com/f8bbxr

Wow. What a turnaround! Nolan Stevens (#17) threads a pass to the blue line to Josh Teves (#4), who settles the puck before wristing a shot past a screened Luukkonen for his first career AHL goal. Good for Teves after a brutal run of luck in his pro-career. Great job by McKenzie (#81) screening Luukkonen on that play. Luukkonen had zero clue where that shot came from.
---https://streamable.com/fgczic

Woah!? Vinny Arseneau (#18) how da fuck are ya!? Amerks with a terrible giveaway bounce in the defensive zone. Arseneau in the high-slot spins with the takeaway and rips one past Luukkonen. No clue what this commentator is talking about, saying Arseneau doesn’t have good mitts. What goal was he watching, lol? Arseneau with his first goal of the year, and it’s a beaut, Clark!
---https://streamable.com/prnfot

Baertschi (#47) with a lethal shot to put the Comets up by four with less than four remaining in the final frame. Rathbone (#3) picks up his second assist on the night with the handoff. McKenzie (#81), again screening Luukkonen, opens up the glove side for the Comets shooter.
---https://streamable.com/2l4v3t

What a slaughter. Fourteen seconds after the Baertschi tally, Rathbone earns himself another primary assist as he fakes the shot to get around Brandon Biro before wheeling down the left-wing. Rathbone (#3) throws a shot off of Luukkonen’s pads, and Gadjovich (#21) buries the uncontrolled rebound.
---https://streamable.com/iexrho

Rathbone and Woo had good games... 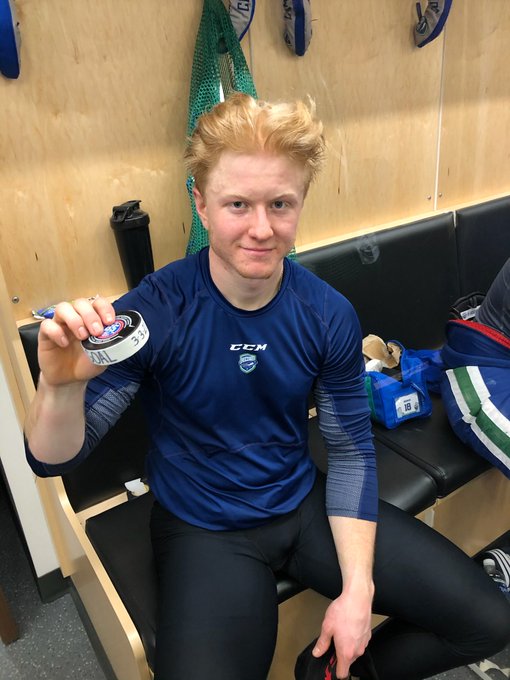 Comets continue their run of scoring the game’s opening goal! This time, Josh Teves (#4) makes an aggressive cut through the center to pick up an Amerks flip-attempt. Teves cuts down the right side, bowling over Griffin Luce in the process before setting up Hugh McGing (#14) for the net-front tap-in. Comets net moorings continue to be dogshit as, once again, the net gets pushed out of position by a light breeze. McGing picks up his first career pro-goal while Teves picks up his first assist of the season. Risky move from Teves, but it paid off. Good effort to capitalize on the risk/reward there

The only-man who scores at 5v5, Jonah Gadjovich (#21), does it again! This time Jasek (#9) picks off J.S Dea’s breakout pass before handing the puck off to Mitch Eliot (#52). Eliot throws a pass into the slot, and Gadjovich shovels it past Luukkonen to give the Comets a two-goal lead. Gadjovich up to eight goals on the season now, the most in the AHL.

And yet again to tie -- https://streamable.com/nhmzbu

Utica Comets @UticaComets
Wednesday's game against the Rochester Americans has been postponed due to COVID-19 protocols. More details here: http://uticacomets.com/news/detail/come ... le-changes
8:31 AM · Mar 23, 2021·

What a mess. This is really hurting Rathbone. Was hoping he's make the Canucks next year.
"evolution"
Top

Spencer Davidson @SDavidsonWKTV
The Utica Comets next three games, all home games, have been postponed. Make up dates to be determined. This makes 10 straight games shelved since March 11 due to COVID-19 protocols.
8:38 AM · Mar 30, 2021

Utica Comets @UticaComets
Comets fans.... let's do this! We are thrilled to announce an all-inclusive ticket to our games starting April 9th! Details: http://uticacomets.com/news/detail/come ... april-9th/
11:30 AM · Mar 31, 2021·

Ticketing
In accordance with the guidance put out by New York State, beginning with our game on Saturday, April 9, the Adirondack Bank Center will permit 10% of its capacity to attend Utica Comets games, which comes out to roughly 400 fans. Season Ticket Members will receive the exclusive early access to purchase tickets, which will be released in 2-3 game increments, before the general public.

GOAL – UTICA – 1-1 - Tie: Wow, Sam Anas (#7) with a gorgeous zone-entry into the Amerks zone before absolutely undressing Matthias Samuelsson. Anas throws the puck to the crease, and it deflects off of John Stevens (#16) and into the net. Jonah Gadjovich picks up a secondary assist for the initial breakout feed to Anas from the d-zone........https://streamable.com/82og48

GOAL – UTICA – 2-1 Comets: Who else, but Jonah Gadjovich! Sam Anas (#7) clowns on Remi Elie along the right wall before driving towards the goal line for a pass. Anas slips the puck past Ryan Jones to Gadjovich (#21), who taps the puck past Luukkonen.......https://streamable.com/f87gsx

-Jonah Gadjovich on the return to play
"I felt alright, I did some good things. There were a lot of things in my game I could have done better. I'll go over it in video tonight and see what I can take away from the on-camera."

🎙@ChrisFaber39
Didn't look amazing tonight but it's also been 30 days since he played in a game and had only been able to skate five times in those 30 days. He gets a pass over the next couple of games.
Comets are back at it tomorrow night.
7:06 PM · Apr 9, 2021

Next Up on the Docket
Pending any delays due to an overabundance of COVID-19 caution, the Utica Comets will be back in action tomorrow at 7 PM EST/4 PM PST against the Syracuse Crunch!
"evolution"
Top

Not so good playing their second game less than 24hrs. after their last.

One goal from Jack Rathbone. A blast from about eight feet in from the blue line.

`The only switch-up in tonight’s lineup is the starting netminders.
`Starting his first game of the season for Utica is Evan Fitzpatrick.
~Starting for Syracuse is Spencer Martin, the soon-to-be brother-in-law of Jonah Gadjovich!

The Comets rookie powerplay group tie the game at once apiece off some crisp passing plays between Carson Focht (#19), Jack Rathbone (#3), and Nolan Stevens (#17). Spencer Martin kicks out a Rathbone point-shot right onto the tape of Stevens stick. Stevens buries the puck under Martin’s blocker side. Great set up from the Comets young forwards and an excellent finish from Stevens. / Goal; https://streamable.com/wklfxj - UTICA - 1-1 Tie: N. Stevens

Comets: Wow, what an absolutely baffling line change from the Syracuse Crunch. Lukas Jasek (#9) breaks the tie for Utica after two players from the Crunch elect to make the long change while Utica maintains puck possession in the neutral zone. Sam Anas (#7) desk through the slot before dishing a no-look feed to Jasek, who rips a one-timer past a very pissed-off Spencer Martin. / Goal; https://streamable.com/pl0rs5 UTICA - 2-1 Comets: Jasek

Jett Woo (#22) with his first goal as a pro, and it’s an absolute beauty! At the end of a long shift for Lukas Jasek (#9), he battles along the Crunch’s end boards for the loose puck. Eventually, Jasek draws a holding penalty as he picks off a pass from the front of the net while tied up. Nolan Stevens (#17) quickly redirects Jasek’s pass to Woo, who rifles a shot. The initial shot gets blocked, but Woo picks up his own rebound, dekes forehand backhand through traffic before flipping the puck past Martin. Brilliant sequence as the result of hard work from both Jasek and Woo. / Goal https://streamable.com/dgjwxn UTICA - 3-1 Woo.

No goal highlights yet as it was streamed, (gotta wait, they got S-kicked anyway), but Lockwood had a fight. He was the loser they say but looked OK to me. The big dude had to throw him down to stop him. What a big baby.