Well, the bulk of your post was about the psychological well-being of some to me unknown talkinghead on American TV.

So I just disregarded all of that.

Mika is the female version of YOU!!

Maybe I should start posting about Swedish TV personalities that remind me of you...

A STATEMENT BY FORMER REPUBLICAN NATIONAL SECURITY OFFICIALS
We are former national security officials who served during the administrations of Presidents Ronald Reagan, George H.W. Bush, George W. Bush, and/or Donald Trump, or as Republican Members of Congress. We are profoundly concerned about the course of our nation under the leadership of Donald Trump. Through his actions and his rhetoric, Trump has demonstrated that he lacks the character and competence to lead this nation and has engaged in corrupt behavior that renders him unfit to serve as President.

For the following reasons, we have concluded that Donald Trump has failed our country and that Vice President Joe Biden should be elected the next President of the United States.

​Donald Trump has gravely damaged America’s role as a world leader. Trump has disgraced America’s global reputation and undermined our nation’s moral and diplomatic influence. He has called NATO “obsolete,” branded Europe a “foe,” mocked the leaders of America’s closest friends, and threatened to terminate longstanding US alliances. Other global leaders, friends and foes alike, view him as unreliable, unstable, and unworthy of respect.

​Donald Trump has shown that he is unfit to lead during a national crisis. Instead of rallying the American people and the world to confront the coronavirus, Trump has spent the past half year spreading misinformation, undermining public health experts, attacking state and local officials, and wallowing in self-pity. He has demonstrated far greater concern about the fate of his reelection than the health of the American people.

Donald Trump has solicited foreign influence and undermined confidence in our presidential elections. Trump publicly asked Russian president Vladimir Putin to assist his 2016 campaign, called on Chinese president Xi Jinping to “start an investigation” into his current political opponent, and pressured the president of Ukraine to act against his opponent. Citing exaggerated claims of voter fraud, he has challenged the integrity of this year’s election, even suggesting that it be postponed.

Donald Trump has aligned himself with dictators and failed to stand up for American values. Trump has regularly praised the actions of dictators and human rights abusers. He proclaimed his “love” and “great respect” for North Korean strongman Kim Jong Un, endorsed “brilliant leader” Xi Jinping’s move to serve as China’s president for life, repeatedly sided with Vladimir Putin against our own intelligence community, and pronounced himself a “big fan” of Turkish president Recep Erdogan despite his crackdown on democracy.

Donald Trump has disparaged our armed forces, intelligence agencies, and diplomats. Trump has attacked Gold Star families, scoffed at American prisoners of war, interfered in the military justice system, and embroiled our military in domestic politics. He has ridiculed US intelligence agencies and falsely branded our nation’s diplomats as the “deep state.”

Donald Trump has undermined the rule of law. Trump has compromised the independence of the Department of Justice, repeatedly attacked federal judges, and punished government officials who have sought to uphold the law. To protect himself from accountability, he has fired officials who launched investigations or testified against him, threatened whistleblowers, dangled pardons as incentives to stay silent, and blocked prison time for a political crony convicted of lying on his behalf. He has impugned journalists investigating his misconduct and has repeatedly denounced the press as the “enemy of the people.”

Donald Trump has dishonored the office of the presidency. Trump engages in childish name-calling, mocks the disabled, belittles women, persistently lies, peddles baseless conspiracy theories, and continually embarrasses Americans in the eyes of the world.
Donald Trump has divided our nation and preached a dark and pessimistic view of America. Trump consistently seeks to incite political, racial, and ethnic divisions, weakening our nation and delighting our adversaries. In contrast to Reagan’s vision of America as a “shining city on a hill,” Trump speaks of “American carnage,” pits Americans against each other, and stokes fears that “angry mobs” and “anarchists” are destroying our country.

Donald Trump has attacked and vilified immigrants to our country. Trump routinely denigrates immigrants and inflames prejudices as he seeks support for his reelection. Despite America’s legacy as a nation of immigrants, he has demonized Americans who come from other countries, even telling members of Congress whose families immigrated to the United States to “go back” to the “crime-infested places” from which they came.

Donald Trump has imperiled America’s security by mismanaging his national security team. Trump has dismissed or replaced — often by tweet — the secretaries of State, Defense, and Homeland Security, the Attorney General, the Directors of National Intelligence and the FBI, three National Security Advisors, and other senior officials in critical national security positions, many because they refused to cover for his misdeeds or demonstrate sufficient personal loyalty.

While we – like all Americans – had hoped that Donald Trump would govern wisely, he has disappointed millions of voters who put their faith in him and has demonstrated that he is dangerously unfit to serve another term.

In contrast, we believe Joe Biden has the character, experience, and temperament to lead this nation. We believe he will restore the dignity of the presidency, bring Americans together, reassert America’s role as a global leader, and inspire our nation to live up to its ideals.

While some of us hold policy positions that differ from those of Joe Biden and his party, the time to debate those policy differences will come later. For now, it is imperative that we stop Trump’s assault on our nation’s values and institutions and reinstate the moral foundations of our democracy.

To that end, we are firmly convinced that it is in the best interest of our nation that Vice President Joe Biden be elected as the next President of the United States, and we will vote for him.

https://www.defendingdemocracytogether. ... -security/
Whatever you do, always give 100 %!
Except when donating blood.
Top

Hey WTF is up with Gene Principe? He’s got the same orange skin as the Pig with a Wig.
“Gohmert and Bumpty sitting in a tree”
Top


Oh my God, Joe Biden is a complete douchebag!

Trending on Twitter through to this morning is Junior's speech at the RNC. 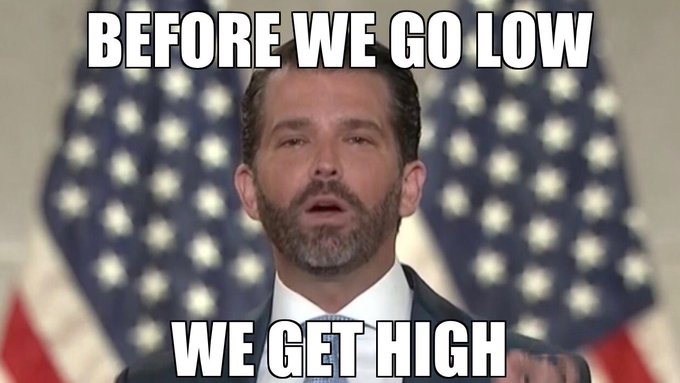 They talk about the bar being low for Biden, but who set it so low? Donnie!

In four years Trumpy-poo will be out, have patience Skyo, you impetuous socialist fiend you!

Trumps been great from an entertainment stand point but this weirdo Joe is looking like hes going to be just as wacked out as the Don. Hes so old he'll never answer for all the groping and weird pedo shit hes going to get away with if he wins.
Witchcraft... Oh, but it IS. A dark and terrible magic...
Top

Yep, Dementia Joe is still butchering the hell out of speeches!

Can ya write it down Joe?

Gotta be a plan b in the works hey doc?
Getting old is not for the young...
Top

Yes, they plan to put Pedo Joe in a home and hand the reins to this crazy bitch:

Holy Hell Batman, it's the Joker!

(I was wondering who the true leader of BLM is)

All of that was from a week prior to the interview.

Nasty Kamala loves (she's so excited!) the burning of American cities, she'd make a great Prez in the eyes of the lefties.
____
GO CANUCKS GO!!!
Top