RoyalDude wrote:Gave up on trying to buy a Toyota truck. Love them but too fucking expensive combined with shit financing, plus I need a full size truck instead of the mid size Tacoma. Come close to biting on a 4.7 litre Tundra but too much dough even for the 4.7. If I won the lotto I'd buy the 5.7 litre tundra

For work truck reasons I went with a demo model with 10K's 2015 Silverado. 4x4, crew cab, tow package for $28,000. Came with a great financing as well. Excellent deals on 2015 Silverados and Sierras right now

Hey dude you probably had lovers nuts for the jap rig because Sean Ellwood drives one.

You huffing scotch guard like they do on a northern Manitoba native reserve again? Cut that shit out boozer
DOYLE WOULD’VE RATHER HAD KEVIN HAYES AT 7 YEARS 7 MILLION PER INSTEAD OF J.T. MILLER FOR A LATE 1ST RD PICK
Top

I picked up one of these for hauling long lumber in the low position, throw my car top boat on it in the high position.

Over the Internet, you can pretend to be anyone or anything.

Topper wrote: After the bullshit I've dealt with from Penticton Toyota and Toyota Canada......I'm looking elsewhere when I buy again.

What are some of the issues you've had Tops?

I had tire issues and Toyotatown in Langley was great helping me out. Gave me brand new tires and rims because they couldn't balance the tires properly. Even sent them out for road force balancing and then after driving for a while the tries would come back out of balance, you would feel a shimmy at high speeds. Once they threw new tires and rims on I haven't had an issue since.
Top

RoyalDude wrote:I bought the V6 six foot box. The long box with extended cab is a bit too big, not condusive for being a van city builder. I'm not that builder who tows a utility trailer and dump trailer. Another builder on my street has the 3500 7 foot box with with extended crew cab, it's a bus. He was the one who pointed me towards the Silverado or Sierra

Smoking deals on the 2015's right now. Mine is silver, looks great. Picked it up last night at Carter GM at north shore auto mall. Put $10 grand down, I bought the extended warranty. The extended warranty actually saved me a ton of dough on my last truck on repairs

So how are you liking this truck ? I'm looking hard at grabbing a 2015 or 2016 this summer. Is the 6 enough power ? My price range is 30 k so I think I should be able to get a decent rig for that couple years old and get the dealer to slap on some extra warranty. I don't want anymore than 60 K on the truck however. Just can't buy a Dodge and I'm done with my Ford.
“Gohmert and Bumpty sitting in a tree”
Top

Looks whose got no more slopping cart, picked up a 14' Acura MDX - SH-AWD Advance, V6. 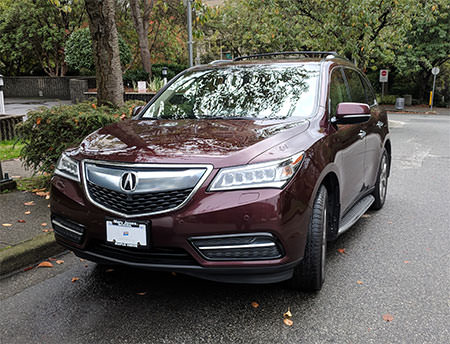 driving uber now?
Over the Internet, you can pretend to be anyone or anything.

Topper wrote: After the bullshit I've dealt with from Penticton Toyota and Toyota Canada......I'm looking elsewhere when I buy again.

What are some of the issues you've had Tops?

I had tire issues and Toyotatown in Langley was great helping me out. Gave me brand new tires and rims because they couldn't balance the tires properly. Even sent them out for road force balancing and then after driving for a while the tries would come back out of balance, you would feel a shimmy at high speeds. Once they threw new tires and rims on I haven't had an issue since.

Frame rust recall. Castlegar and Williams Lake (possibly others) take 2+ days to do the truck. 1st day clean the frame completely and leave in the shop overnight to dry, 2nd day, inspect, grind/buff out any rust spots if needed then treat the frame. Allow to cure overnight inside their shop. Late on the third day when most of the sealant has cured and the stench gone from the truck, they call the owner to pick it up.

Penticton Toyota, 4 hours, done. Got home and looked, they hadn't cleaned, inspected or ground/buffed out anything. Spray the treatment and return to customer. I sent them pictures of where they'd sprayed over clumps of mud on the frame. They took it back. washed and retreated those areas.

Obviously the frame was never inspected. If it had been the person inspecting it would have noticed the mud and dirt that needed to be removed so he could see the frame.

After the second go round and I still found mud on the frame, I had them put it on the hoist so I could inspect it. Service Manager denied it so I wiped mud on his arm. He went nuts accusing me of assault, threatening to call the cops, telling me to "get the fuck out of his shop" and tried to lower the hoist while I was under the truck taking pictures of the mud still on the frame.

Launched a complaint with Toyota Canada. Three months later I got a call from them stating they had spoken with the dealership and had been told the job was done correctly, case closed.
Last edited by Topper on Fri Oct 12, 2018 1:10 pm, edited 1 time in total.
Over the Internet, you can pretend to be anyone or anything.

Wow. That's absolute garbage. I can't actually believe the manager took that approach. Swearing at you?

I've had indifferent to poor service from the Toyota dealer in Victoria, so I tend not to give them my business, but with recall stuff you don't have much choice.
Top

Fucking assholes. I had a toyota prematurely rust out years ago and the lougheed hwy BBY dealership said that at 200 k they dont give a fuck about it or you. I have been tempted but never bought one since.

The one i have now is ugly as fuck but such a pleasure to drive on hwy... i have to shamefully admit. The honda service has been excellent as well. (2017 chinese recreation vehicle)

I load on about 50-60 k a year so flip vehicles often. Next one I'll try the ugly ass ridgeline i think
Witchcraft... Oh, but it IS. A dark and terrible magic...
Top

I've had great service from the dealership in Williams Lake. This came down to Penticton Toyota and Toyota Canada. Penticton is used to seeing trucks used for hauling golf clubs not trucks that are used as trucks. Toyota Canada didn't even consider the customer.

But they gave me a crappy flashlight that broke the first time I used it.
Over the Internet, you can pretend to be anyone or anything.

Damn, I knew the GM at Toyota in Langley and always got good service! Still like the 2016 Taco, versatile truck that was all I needed.

Finding now I want something bigger that can tow. Have a small trailer and even that taxes the Taco on the Coq and other interior Hwys. Likely pick up a diesel next go round, like that the F150s have that option now. Not sure which brand to try next time, pretty much found I'm not brand loyal at all - just go with what work best for what I'm doing at the time.

More Hwy travel now and hauling things around, plus not in the lower mainland anymore so a full size would be nice. Actually have a garage that'll fit one now!
Top

The Ram Ecodiesel is all you’d need AaronP.
Top

Only if you jack it up.
Try to focus on THIS year... again
Top
Post Reply
407 posts