Last night they played in WÃ¼rzberg, about 130 km away from my home. My brother decided to drive and so it went on. We came back 2 am and i had to wake up 6 am this morning. Damn, but it was worth it. cheers.

Hey speaking about brothers in another thread.

Anyways greetings from the brothers Byron and Adam in the band to their cousin.

Oh man, what a blast it was. the more i'm listening to their stuff the better it gets....

A pic's coming within the next days...

I've been following their tour a bit thru their facebook page and their girl friends are keeping us in the loop as well. Sounds like they're having a good time. Glad to hear that you got a chance to catch them again.

Be sure they're having.

And it won't be the last, unfortunately one of my best brother Â´"in mind" is from an european country where i'm going to see them again on this tour.

Hell yeah roadtrip, I'm not going to say where because of all the "netspys". It'll be a real surprise... so glad to make it. What a roadtrip, as you can see the Zadravec and Slack Brothers with Menno and Hans..... yyyyyeeeeeeeeeeehhhhaaawwwwwwww. 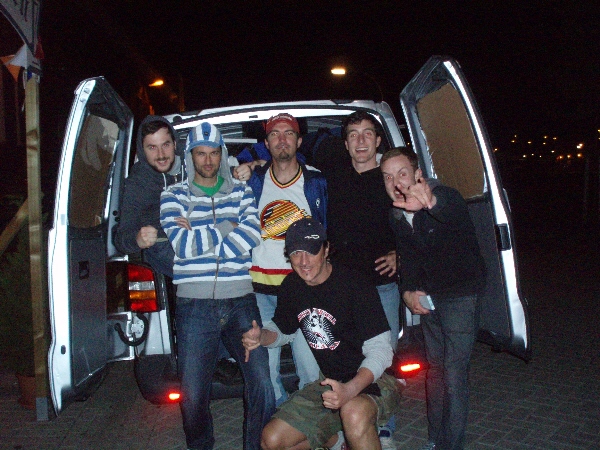 ...For those of us not in the know, care to explain?

What exactly ? Dare to ask specific questions or rhyme it together.

The Real McKenzies are still playing? Saw them quite a bit back in the day. Fun times.
2019-20 - Playoff Bound
Top

Just wondering what the post is about, I'm aparently not in-the-know. Who are the Invasives? Seems a couple of you know the guys in the band? Oldtime Hockey, arrgh rock n' roll! Heh, are they a rock n' roll band in Europe who are hockey fans? Relatives of board members?

Just wondering where this all comes from, looks and sounds like a sweet roadtrip tho!

They are the finest rocknroll band out of Van-City touring Europe and we're following them quite a bit. Met them last december with the guys from nomeansno.

hey cornuck, the kenzies still playing but without dirty kurt, talked to paul and he said that kurt has some problems with a woman.....

THE EPIC STORY OF INVASIVES

The three men of Invasives were all but born into a life of music. Drummer Hans Anus spent much of his childhood being babysat by his father's bandmates, until scurvy forced them all into an early retirement. Hans has recounted that "touring privateer vessels is both exciting and arduous". Brothers Adam and Byron Slack, who have known each other since Adam's birth, honed their musical skills recording homemade lo-fi demos on a boombox, all before hitting the ripe old age of ten. Years later, as their lives converged, Hans and Adam met on a peewee football league (both of whom inadvertently inspired the movie "The Waterboy"). Upon realizing organized sports were not the wise activity for slight, artsy youths, the boys spent their secondary education years performing jazz, drama, fine art and skateboarding.

Adam and Byron formed a musical project called Dredger, but much like early Pantera, much of this band's existence is shrouded in mystery.

Hans independently formed his own band (we prefer to call the project Unicorn Boy), which led to Byron jamming with Hans at a "house party", perhaps even a "kegger". Byron and Hans forged a bond that led to forming their own musical endeavor. Adam, being the typical younger sibling, pestered and pestered the other boys until he was finally allowed to join. However, to teach him a lesson and keep him in his place, Byron and Hans forced Adam, an aspiring guitar player in the vein of Guy Mann-Dude, to play bass. The trio was quickly asked to play some shows. This led to a hasty decision to name their project Married to Music.

The band released their first independent record, "The World's Gotta Go Round", in 2003. The trio undertook an enviable touring schedule which has since made the boys (who, by this point, were becoming men, though still slight of physique) experts on the Canadian highway system. Their hectic touring schedule led to groundbreaking tours with the likes of Removal, Hanson Brothers, and NoMeansNo. The band came to the attention of SNFU's Rake Records, which released their second album "Sweet Kicking and Screaming" in 2005. Thanks to some favors being called in, the record was mixed by David Ogilvie, known for his work in Skinny Puppy and The Tear Garden. Bill Leeb did not appear on the recording, contrary to popular belief that Leeb has appeared on every album ever recorded. Black Banana Records, founded by the legendary Circle the Wagons, released a 7" called "Miracles" in 2005.

After a tour with the Hanson Brothers where Byron successfully caught a cabbage in a bag, the trio began work on their third full length recording, which found the band seeking a name change. After many monikers being bandied about, such as "Pizza" and "The John Chedsey Blues Experience", Invasives was chosen due to the fact that a google search proved no one else had used the name before. In late 2007, Invasives undertook their first European tour under the wings of NoMeansNo, whose Wright brothers guested on the 2008 Invasives self titled release.

2008 finds Invasives poised with their finest record to date, ready to visit their new friends in Europe once again. Five years of hard touring and hard work have gotten their stage show honed to a finely tuned machine. As Mike of the lamented Circle the Wagons once said, "When we tour with Invasives, they just get faster and tighter. We just get faster."