Benning has gone from, only the top three are elite NHL ready talent with a big drop off after that to, the top six are elite talent. Posturing or maybe he's just over the disappointment of dropping down in the draft. They had to feel a top three was theirs.

Eriksson has long been rumoured as a target especially when he said their UFA targets would be players in their 20's or 30 something if they had familiarity with the team or some of the players. Will he take a 2-3 year deal though? Would hate a deal longer than that for him but it sure would be fun to see him with the twins.

He has gone on record as saying that to get the 5OA he wants a young top six goal scorer and a late first or early second. Wonder what names are popping up. Obviously not one that has him ready to pull the trigger.

During the exit interviews Burrows was told his fate would be determined after the draft, maybe even after the first week in July. If Benning has a good draft and lands 1-2 FA he is targeting Benning will try to move Burrows then or he'll get bought out during the second buy out period.

Higgins I think is as good as gone. I'm sure Benning will try to get something for him, even a 6-7 rounder or use him as an add on in a trade or if he makes a deal to get a bad contract for picks maybe toss Higgins the other way. On the other hand, if Vey is gone and Burrows are gone I could see them keeping Higgins for his vet presence since they still want to be a playoff team. And if we are out of the playoffs TDD Higgins might be easier to move as he will be on an expiring contract. Still a shit return. Or hell waive him. Green loved having him

The only HW the Canucks need
Top

Buying out Burrows makes no sense. The team would still get whacked with a pretty good hit for the next two seasons. There is no hope of trading him and not eating salary so maybe it makes more sense to deal him and eat 1.5 million and still get 3 million off the cap. Is there a team out there willing to have Burrows at a 3 million cap hit ? Maybe. That team would only be on the hook for 1.5 million in actual dollars so that could be attractive to some teams.
“Gohmert and Bumpty sitting in a tree”
Top

Blob Mckenzie wrote:Buying out Burrows makes no sense. The team would still get whacked with a pretty good hit for the next two seasons. There is no hope of trading him and not eating salary so maybe it makes more sense to deal him and eat 1.5 million and still get 3 million off the cap. Is there a team out there willing to have Burrows at a 3 million cap hit ? Maybe. That team would only be on the hook for 1.5 million in actual dollars so that could be attractive to some teams.

That makes more sense then any other options to me.
It's better for the rebuilding Canucks and it's a fresh start for Burrows.
I think he'd be open to it and at 3, there would be suitors, pretty sure.
It's not being ugly, it's just the best thing for all concerned.
"evolution"
Top

The only way Burrows gets bought out is if the Canucks need both a roster spot and cap. That's why FA period will be important. I don't think Benning wants to go that route though. When Burrows told his fate was, in part, linked to the draft, the Canucks were thinking they were drafting top three and the player they drafted would be on the team next year. That's changed.
The only HW the Canucks need
Top

I think the best avenue for removing Burrows is via trade to one of the basement teams looking to get over the floor. His cap his is very desireable given his actual salary owed. Even still Van could retain a bit of salary return a decent pick
Top

BladesofSteel wrote:I think the best avenue for removing Burrows is via trade to one of the basement teams looking to get over the floor. His cap his is very desireable given his actual salary owed. Even still Van could retain a bit of salary return a decent pick

Yup, Burrows (retained) for a 3rd round pick.

I've been saying for a loooong time that Burr is very trade-able and that Higgs will get bought out.

I've seen nothing that would change my mind on these things.

nuckster wrote: To be clear, i brought this in from another site here

Gets one thinking about how the roster is going to look when mister JB is done this coming week and after the first week or July . Its quite the time of year. Questions about the draft have been whirling about for some time now. I have the friday off but i guess it doesn't matter given the 4:00 pacific start time. Some of you city folk will have to drive 'assertively'' in order to get home and see ole JB announce our future. Some are going on about how we will acquire a few FA's and then .....whooosh, we're a playoff team all of a sudden... we'll see

Truth be known i check into this site almost daily - hardcore. Being on the periphery and lookin in makes it easier to to Juolevist peruse and move along. Lots of thoughts arise here an there, so there's times i would like to offer views here an there but the frikin smart phone has a humbling side to it where it comes to typing...so i don't
Cheers and oh yeah, i will be watchin ya

Are you trying to drive me completely INSANE??!!!

ERRR... that is... you’re a sterling poster master Nuckster, don’t be such a stranger!

Not too shabby SL.

I figure we can snag a high pick, pulk' and absorb Datsyuk's cap hit, while still signing LE and TL.

It requires buying out Higgins,
trading Hansen to Detroit,
trading sbisa for a minor leaguer
and trading burrows for franson, chose cody as his contract is a smidgen cheaper than burrows and both their contracts expire next year. 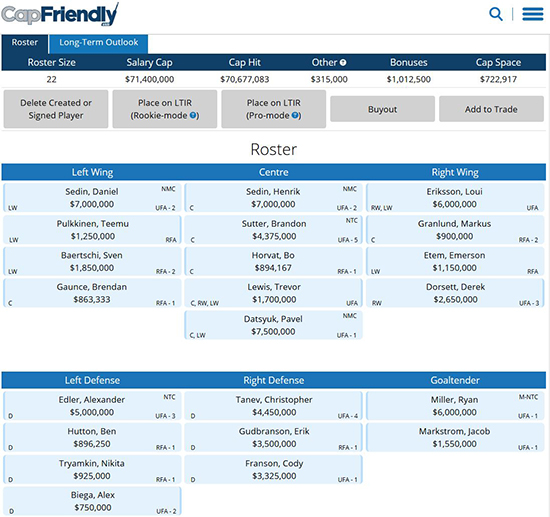 What happens when one of our forwards gets dinged up for 1-2 games?
Top

Island Nucklehead wrote:What happens when one of our forwards gets dinged up for 1-2 games?

Hey, thanks. I have no humility. I'd take 4th line NHL money any day.
Beats what retirements gonna pay in 7 years.

Seriously though: Got the same hopes for Horvat. Really would make people happy if he has the kind of break out year most of us think he can.

Island Nucklehead wrote:What happens when one of our forwards gets dinged up for 1-2 games?

In comes one of Virtanen, Cassels, Rodin or Laplante.

Your chart shows $722K in cap space. At the NHL level, Rodin makes 950K, Laplante $836K and Virtanen $894K. Cassels is the only guy out of that group you could call up and remain cap compliant.

Unless someone's injury means they'll be out for 10 games/24 days, there's no cap relief.

That's why you almost always see NHL teams carry 23 players (including goalies). Your roster has 21 players.

Anyways, Benning wants this team in the playoffs and eating $7.5M of cap isn't going to do that, nor is Detroit going to trade Pulkinen and a first just for some cap space. Keep in mind, Datsyuk isn't going to be getting paid anything, a team like Arizona/New Jersey/Buffalo/Carolina etc. could get a 2nd rounder, reach the cap floor, and not add a cent to their salary structure.
Top

His mind is going a million miles an hour right now.

I realize it is to be ignored for this next 7 or 8 days and all teams have to look at it that way, but!
Do you really want to spend to the max with the World Cup Of Hockey RIGHT before the start of the season.
Once this thing ramps up, how can there not be injuries?
Don't see guys like Ovy letting up on anyone, same can be said for some Canadian and Americans.
This aint a bunch of all star games, it will get heated.
I don't think the Sedins will be over played, but, who knows?
Hansen will get the shit played out of him, bank on it.
And it would not surprise me if Marky out plays "The King" for #1.
Some teams have it worse than us.
Just something to keep in the back of your mind.
An especially tricky start to the season, maybe.........